Kato Boon Fighter or Farmer in his Blood 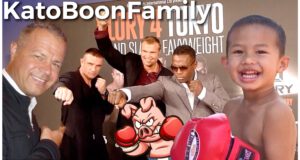 Kato Boon Fighter or Farmer in his Blood. Mama Rak thought it was wise to buy a set of boxing gloves and a pair of boxing shorts for Kato. Papa Bas Boon has mixed feelings about mama’s surprise and soon pays the price. Baby Kato Boon fighter is having a blast and wants to fight against nephew Pam. *KBF29 Papa ...